Published in The Daily Telegraph on 24th June 2013.  The original article can be viewed here

Please read my footnote at the bottom of this page

Emily didn’t ‘only’ have ME 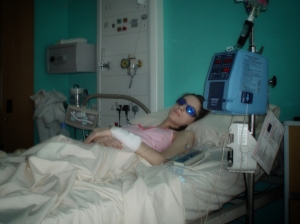 Exactly a month ago today, an inquest ruled that Emily Collingridge, an ME (myalgic encephalomyelitis) sufferer, died from the side-effects of prescription drugs she was taking to alleviate her terrible pain.

Emily had an extreme form of ME, one that is little recognised by doctors and arguably neglected in the NHS.  But her death in March last year, aged 30, highlights the grim reality for those afflicted by it.

Like me, Emily had suffered from ME since childhood and we were friends for many years.  We were never well enough to meet, but built a strong bond through texts, emails and letters.  Her small relief from her living hell was her BlackBerry.  With hands twisted by spasms and eyes that struggled to focus, she painfully typed out messages to others with ME.  She worked hard to improve understanding of ME and was the author of a highly acclaimed book for those severely affected.

ME affects an estimated 250,000 people in the UK, with roughly a quarter so severely affected that they are house- or bed-bound.  Despite official recognition of ME as a neurological condition, many doctors and the public persist in thinking of it as “psychological”.  Including ME under the banner of Chronic Fatigue Syndrome has added to the misconception of it as a form of glorified tiredness, despite the wealth of research that points to a disease with a biological origin, affecting every bodily system.

Emily Collingridge’s condition was far removed from “fatigue’’.  During the final years her body was racked by pain that resisted high doses of morphine: bedridden and doubly incontinent, she had to be fed by a tube.  She would vomit for days at a time and suffered frequent, life-threatening infections.

“The most severe cases can be life-threatening.”  –  Dr Nigel Speight

These are not symptoms normally associated with ME, says Dr Nigel Speight, an ME specialist in Durham who saw Emily four months before she died.  “While many doctors accept the reality of moderate and severe ME, few realise that there is a rare, extreme form.  No one really knows what causes the illness, but the most severe cases can be life-threatening.”

I was 12 when I developed ME, after a seemingly innocuous virus.  I went from being an active girl to an invalid who needed to be spoon-fed.  I was unable to speak or open my eyes.  Light, sound and touch were agony to me.  Now 36, I am dependent on full-time care from my mother.  I spend most of the day in bed with the exception of the occasional outing in my wheelchair.  Yet I consider myself fortunate because the crippling symptoms of the early days have eased enough to allow me to take pleasure in life.  I can communicate through email and Facebook, and have a wide network of friends.  I’m grateful for every moment that I breathe free of agony.

In contrast, Emily spent years in darkness.  Yet she never lost her sense of humour.  Her fierce determination was evident at every turn.  “I have so many plans, so many things which I need to do that I have to find a way to keep going,” she wrote, a few months before she died.

In common with many others, Emily fought a dual battle: against the ravages of the illness, and medical ignorance and scepticism

The toll on her was huge and she frequently questioned how much longer she could endure it.  “I don’t feel very brave – just somehow trying to get from one moment to the next without collapsing into panic.  Or collapsing full stop, as I honestly don’t know how much more my body can take.”

In common with many others, Emily fought a dual battle: against the ravages of the illness, and medical ignorance and scepticism.  She first fell ill at six, was diagnosed at 14, and became very ill in her early twenties.  It is hard to believe that someone suffering dramatic bodily spasms and vomiting uncontrollably could be viewed as exaggerating the severity of their illness.  However, Emily’s mother, Jane, told me that her daughter’s last admission to King’s College Hospital in London, which lasted over two months, was marked by doctors’ seeming reluctance to accept the gravity of her condition.

A spokesman for the hospital disputes Jane’s allegations: “During Emily’s stay at King’s, we did everything within our power to treat her, and provide her with the best care possible.  Our doctors and nurses spent many hours with Emily, answering her questions and doing everything possible to address any concerns she had.  We explored every appropriate treatment option for her, but sadly she died in 2012.”

An inquest was held following a post mortem and the cause of death was given by the coroner last month as “respiratory arrest in an individual with clinically diagnosed ME due to the side-effects of prescription drugs and aspiration of gastric contents”.  The coroner acknowledged that more research was needed into ME.

Severe ME presents challenges that the NHS is ill-equipped to deal with.  Sufferers are acutely sensitive to any stimulation, making the noise and bustle of a busy hospital a form of torture.  Sympathetic staff will do their best to ease the agony of sensory stimulation, but there are those who continue to view these symptoms as the patient simply being difficult.  Many of us have been so traumatised by being in hospital that we would risk our lives rather than consider admission.

Her life was claimed by an illness that, at its most severe, has been compared to Aids and terminal cancer, yet which is trivialised far too often

A year before her death, Emily penned an appeal for greater awareness of the reality of living with ME, writing: “I have been pushed to the greatest extremes of suffering that illness can ever push a person.  I have come very close to dying on more than one occasion.  If you met me you may well think I was about to die now – it’s like that every single day.”

Her life was claimed by an illness that, at its most severe, has been compared to Aids and terminal cancer, yet which is trivialised far too often.  Right to the end, Emily had to fight against the belief that she “only’’ had ME.

I will carry the memory of Emily’s tenacity, courage and zest for life, always.  And the one hope remaining to those of us who loved her is that her suffering was not in vain; that at least one of her dreams – proper understanding and support for those with ME – will eventually become reality.

Emily Collingridge’s book, ‘Severe ME/CFS: A Guide to Living’, can be bought here

The opening sentence of this article was decided upon by the Telegraph’s health editor, following considerable discussion between us over how to interpret the narrative verdict given at Emily’s inquest.  The coroner recorded the death as “respiratory arrest in an individual with clinically diagnosed ME due to the possible [my italics] side effects of prescription drugs and aspiration of gastric contents.”  The pathologist stated that it wasn’t possible to attribute Emily’s death solely to ME because of lack of established physical signs.

Emily’s family and ME specialist, Dr Nigel Speight, firmly believe that she died directly from her ME.  The fact that this was not stated on her death certificate reflects the difficulty that exists in having ME registered as an official cause of death.  In cases where doctors are reluctant to recognise it as an organic illness, death will naturally be attributed to other causes.  Even when the illness is accepted as severe and potentially life-threatening, a coroner would have to go against the official government line – that ME is a fatiguing condition treatable by behavioural therapies – in order to record it as the reason for a fatality.  At the time of Emily’s inquest, only one person in the UK – Sophia Mirza – had had ME registered as the official cause of death.  In such a climate it was unlikely that Emily’s death would be directly attributed to ME.

In writing this article for the Telegraph, I became aware of the legal constraints on news organisations in terms of what can and cannot be committed to print.  The opening sentence of my article is a reflection of this, rather than being an accurate statement on the cause of Emily’s death.